Fifteen > Blog > Creative > The Power of Creativity in Eco Design

The Power of Creativity in Eco Design

Within a few years, there have already been a few changes in the way we live our lives. I’m talking about the waste we produce from a consumer and how we can reduce this consumption.

Clever marketing, clever thinking and creative processes are making a small yet massive impact on our culture and most importantly our precious home, planet Earth

What I’ve seen thus far is quite amazing.

Companies around the world are reinventing some of their most famous products to help the environment. From global firms to small businesses, companies are looking at ways of reducing the damage to the environment.

I’m not saying I have the answers to the Earth’s problems however I help in small amounts which have dropped my Carbon Footprint. Since becoming a father and with another one on the way, I want to live in a place that my children will be able to live in. Change starts at home so with a few simple habits we can all do our bit.

Here are a few things I have done that has changed my lifestyle a little: 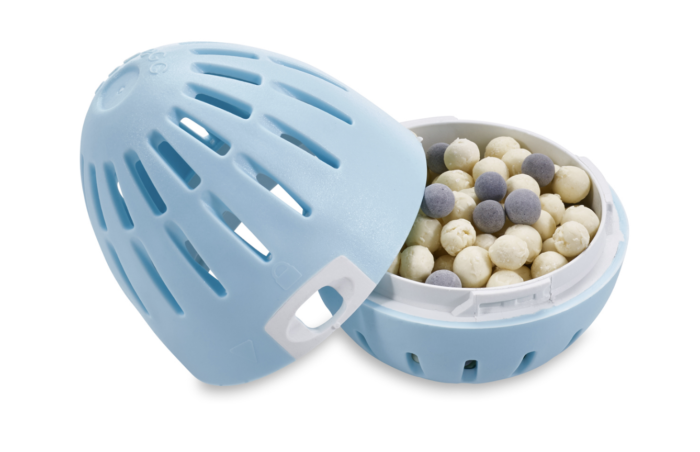 Ecoegg, founded in 2008, has built their success over the years by providing that effective and even low cost, eco-friendly products for both clothing and cleaning. They produce innovative products that are free from harsh chemicals and kind to your skin, including being kind to the environment. Ecoegg’s products also help their customers’ pocket by being longer-lasting and costing less per-use.

I’m a big fan of The Ecoegg Laundry Egg. This mineral based clothes washing system works without the use of harsh chemicals. They take their responsibility of our planet seriously, it’s central to everything they do and every decision they have made.

Another thing I have recently done is to use reusable nappies. Using these nappies means that less waste is taken to landfills across Britain and potentially overseas. Can you think that there are approximately about 8 million throws away single-use nappies that are thrown every single day here and it is thought they could take hundreds of years to decompose?

Single-use nappies do make up of the 4% of landfills across the country and it is therefore estimated by using simple cloth nappies, even for one child, many parents are able to divert 874kg from our landfills. On top of this they can also reduce the carbon footprint up to 40% compared to using nappies that are disposable, but not compostable.

But this isn’t really why I’m talking to you today. I’m really going to show you a few things that I have seen along the way that you might think…hmm that’s clever or wow I need to have some of them in my life from a design perspective.

One thing I did see that did pique my interest is something that China is currently working on. China produces 80 billion, yes 80 billion pairs of disposable chopsticks. This equates to a total of 3.8 million deforested trees at a rate of 100 acres of forest destroyed a day. Which means that China only has 3.38% left of its forest remaining.

So their rational creative thinking has allowed them to create 15 million edible Chopsticks which you’ll be able to eat or throw away (as the chopstick will decompose in a week). This will reduce the number of chopsticks being thrown away and reduce the use of the forest.

Where did I hear this? I saw this on a post that D&AD have done on LinkedIn. 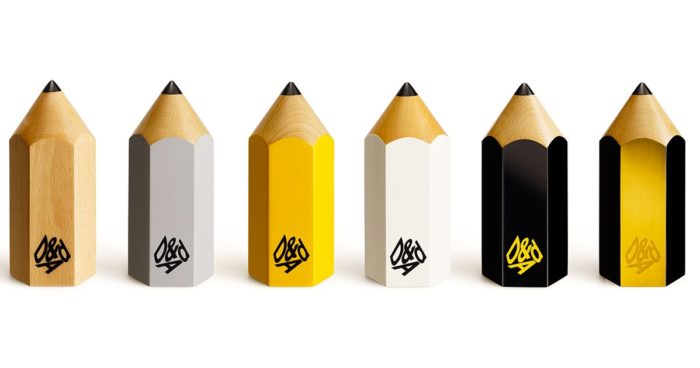 D&AD Impact amazingly celebrates the great creative ideas in which have a real solid impact on the world and, ultimately help towards shaping a better planet. They also praise those with fairer solutions for our future. What’s more, they award a prize fund of $20,000 at last year’s D&AD Impact Awards. The winners chosen by judges are based on eligibility criteria that are alignment alongside the D&AD Impact’s mission values, including its potential scalable aspect of the project and how the fund would be utilised.

One campaign that stuck to mind is the #stopsucking campaign. 500 million straws are being used by Americans every single day in 2017. So creatives thought how could they get the message across for people to stop using plastic straws. The campaign saw actors, singers and campaigners post on social media and shout to the world that they will Stop Sucking. This boomed into a Challenge to upload a video using the hashtag #stopsucking pledging that they will stop using plastic straws.

All in all the total social reach was approx 76 million and total media impressions tallied at 831 million. They even made an entire city in the United State, Seattle, go strawless. The first ever city in the world to do this.

This has helped to keep 100 million straws out of the oceans.

There are companies who are turning to their own products and thinking about how can they reduce the amount of single-use plastic. One example is Carlsberg.

The giant within the beer industry all from the way Denmark is claiming a world first. Carlsberg has said they have reduced up to 76% of the plastic off of their multipacks. This is a huge number and how they will do it is amazing… 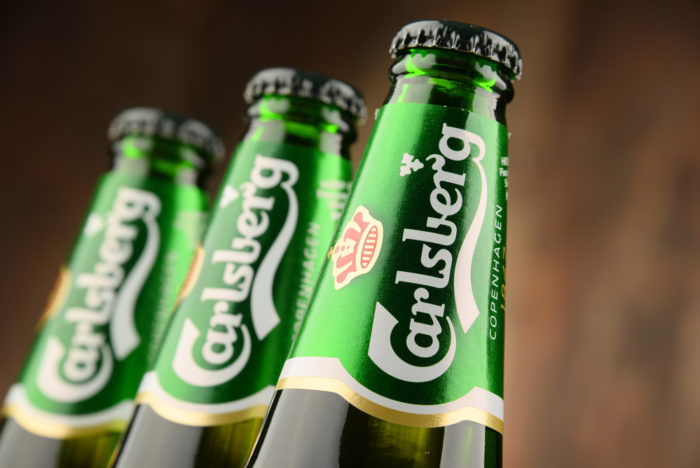 Introducing the ‘The Snap Pack’, which it is holding their Carlsberg Expørt cans tightly for their multipacks. This is all formed from a small piece of highly adhesive glue, which can be easily pulled apart and at the same time is strong enough of the transport from factory to supermarket and right to your home.

They also announced that they will also be using a new cap in which will remove the oxygen from the beer making it taste better for much longer. This switch from their standard labels to their special inks on their new labels are to enhance the recyclability, giving the opportunity to fully recycle the bottle. And with their specially formed coating on the bottles, now add extra life onto the bottles allowing them not to break down. And on top of that, they added a rebrand to it too. Why not!

Another global brand that is cutting its production of plastics is Fairy, a P&G brand. Yes, that’s right the dish soap that most of us have in our homes.

Raising awareness on ocean plastic clean up, Fairy has launched its powerful dish soap that is all contained within a bottle, made from entirely recycled plastics, including 10% from the ocean’s plastic clean up. This project aims to illustrate to the consumers all about the ocean pollution that we are facing and the very importance of proper recycling.

What will the new bottle be developed with?

On our UK beaches, there are already volunteers collecting unwanted plastics. This is where the fun really does start. These are then ground down into small pellets, which are then transported to P&G. The material transported is then transformed into Fairy Ocean Plastic Washing Up Liquid bottles you see today. These bottles are therefore recyclable, so the plastic reused to then convert into other things. Diverting 8,000 tonnes of plastic from landfill every year for use in transparent bottles.

Other brands such as Ecover have also introduced this into their packaging making it also lightweight and pretty.

Ecover the leader in this industry, is already using a bottle that is  100% reusable, made from 100% recyclable plastic from both the ocean and our recycling for its bottles (25% recycled plastics and the other 75% is from renewable plastics from plants, all since 2012). The limited-edition (not sure why they should have ever sold it as limited) Ocean Dish Soap bottle debut in 2014, containing 10% ocean plastic collected by fishermen in the North Sea. 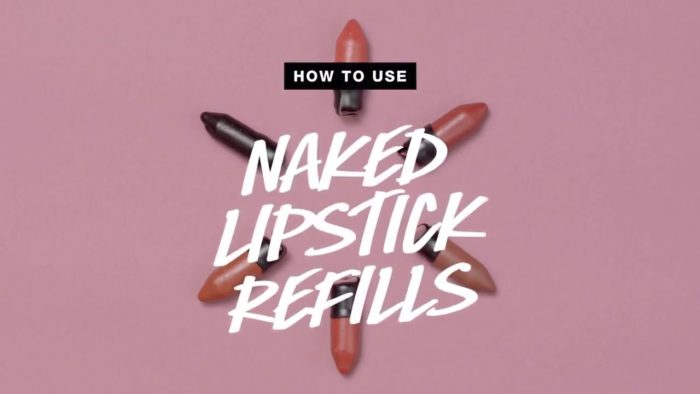 We have one campaign that is getting the traction that is very creative. Lush has launched a refillable range of lipsticks to tackle the issue of single-use plastic where this range will, therefore, help on this, but reducing the amount of excess unwanted packaging.

Cruelty-free and vegan brands of lipsticks do come in many forms. In fact, there are as many as forty shades and all without single-use packaging.

The lipstick end is coated with a peelable piece of wax that you are able to simply remove, just before you place this into an old, yet clean lipstick holder. What id you don’t have a lipstick holder? In fact, you’re able to use a different holder from another brand. It was estimated that 61% of cosmetics, including toiletries, were in plastic packaging in 2015 — and now that figure is added to by another 12% by 2019. However, with this, more and more brands will look to produce refillable products pathing the way for a decrease in plastic consumption in the cosmetic industry.

Marketing and creativity show how simple it is to recycle and reuse.

There is a lot to be said about the environment. We’ve been warned for years and it’s now starting to show that the planet is now on high alert. It must be serious if Sir David Attenborough is talking about it.

I love my home and I would like it to be better for my children’s children and many to come.

There are lots of ways you can reduce your waste, your carbon footprint or even harmful chemicals reaching our oceans, but they don’t have to be boring. Let it be known you’re doing something to save our blue world ball. We’ve only got one left, let’s keep it.

Here at Fifteen, we do our best to reduce our carbon footprint. For example, our toilet lights are switched off once someone has been, we recycle all our toners, paper and batteries too. And every day we are finding ways to reduce our waste as a company or as individuals.

Global warming is happening and it’s a shame it’s now. Let’s fight this and win back our planet. Go for green and believe in the power of creativity to change the world.

Categorised in: Creative, In The Media

What’s Your Creative Type? 30+ Photoshop Shortcuts You Need to Know
Back to Blog