How Love Island is Helping Brands – A Lesson in Content Marketing

I haven’t lost my mind, honestly. I’ll openly admit that I like many others in our office, who probably refer to remain anonymous watch (and are glued to) ITV2 show, Love Island. The show is currently airing its 4th season, pulling in its highest ever ratings. However, the ITV dating show, which sees single, ambitious young guys and girls compete to remain in a romantic couple, has taken on a whole new presence this year. Amassing millions of comments across social media, of viewers utterly engrossed in this year’s blossoming relationships.

So, how does any of that relate to an engaging and successful marketing strategy? Sit back and let these brands show you how it’s done.

Millenial brands like Boohoo are ideally positioned to interact with average viewers of the ITV2 show. Sitting within that 16-24 age bracket, agency Greenlight measured Boohoo with a percentage affinity to Love Island of 91%. So, it’s unsurprising the Boohoo’s social commentary of the show pulled in plenty of engagement. However, it was this stroke of reactive social genius we particularly enjoyed.

In response to a tweet from favourite influencer Vicky Pattison, the Boohoo team acted quickly to create a discount code for their popular e-commerce site, playing on events unfolding on the show that very evening. This instantly reactive brand presence works wonders for engaging a loyal audience. Not only do you appear entirely on the ball of current events, but it also demonstrates what everyone wants to believe from social- that a REAL person is actually on the end of those 280 characters. Capitalising on a very narrow window of opportunity can provide a considerable increase in revenue with minimal (if any) initial spend.

In a similar way to Boohoo the Missguided audience persona is not at all dissimilar to Love Island’s viewers. With 75% of viewers categorised as female, clothing brand Missguided has smashed (for no want of a better term), the marketing potential of this series. Not only have they secured prime-time advertising slots in between the show’s airtime, but they have also distinctly focused the messaging of these ads in line with their ‘Make Your Mark’ campaign celebrating diversity and body confidence. But, they didn’t stop there. They decided to go a little old school with some try and tested product placement, choosing to provide the entire wardrobe to the female participants of the show alongside make up sponsors Revlon. This provides them, not only with ready-made influencers but also allows them to utilise pixel implementation by linking exact match products with ‘shoppable’ live trends on their social channels.

? ISLAND STYLE ALERT! ? Tonight we’ve officially uncovered the 2018 Villain of the Villa (Adam, it’s a no from us ?‍♀️), crowned Rosie Top Hun, AND put all the outfit style steals from tonight’s episode in one easy place. Head to our Insta Stories to shop them all! ❤️?❤️? #ISLANDSTYLE #missguidedstylesloveisland #loveisland

For those of you who aren’t purveyors of the biggest dating show since Cilla Black pioneered Blind Date, you won’t know that unlike other favorite reality shows the contestants are allowed access to mobile phones. Enter, Samsung UK and their latest Galaxy S9 model. Contestants are allowed to use their phones to take a multitude of snaps during their time on the show. These are subsequently used by the shows social media team as sought-after insights while the cameras aren’t rolling. Providing the perfect potential for Samsung to promote their new model, using the selfies as user-generated content.

The producers of the show also, sneakily use the devices to control the narrative of specific episodes, sending texts to the contestants to effectively create more intense storylines. Again, for those of you who haven’t watched an episode- this action is loudly and abruptly alerted to during the show as the contestants excitedly inform their peers “I’ve got a text”- essentially for Samsung they may as well scream the words- “Influencer marketing for Samsung.”

Jumping on the bandwagon of official sponsors, Jet2 have tailored a full 8-week digital campaign to the runtime of the show. Instagram story ads, Snapchat non-skipabble’s and a perfectly timed campaign email- no opportunity has been missed. What better content marketing opportunity than pushing your ad all over a TV programme set in a Majorcan villa full of swim gear clad influencers? The perfect platform which Jet2 have exploited across all platforms. 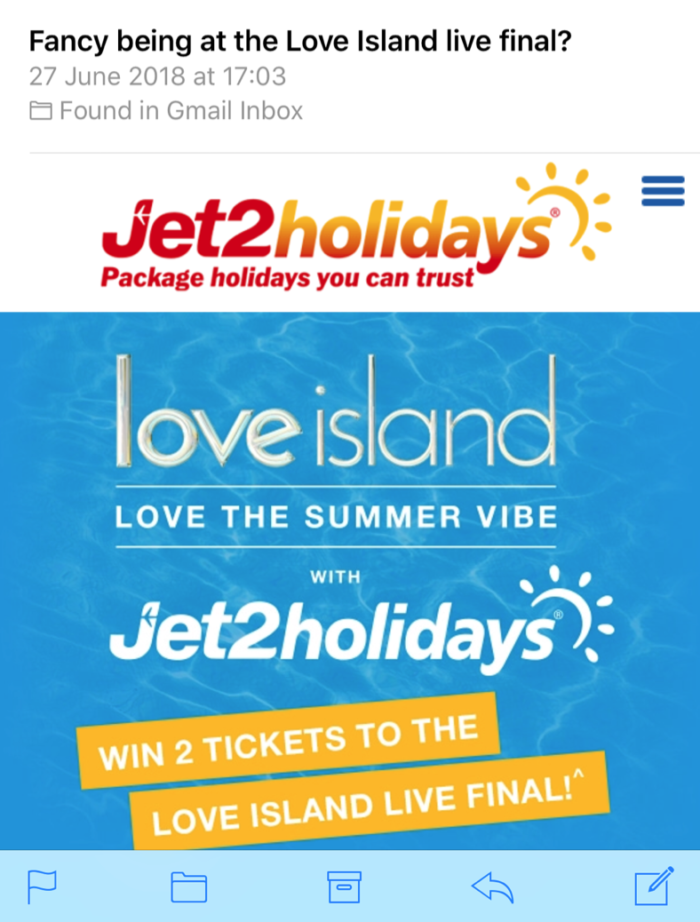 Now, we know Love Island isn’t entirely relevant to every brand and it’s important to remember to be selective about the bandwagons you jump on. Exploiting the right opportunities is key to not only attracting the right audience- but keeping them engaged.

For those of you who are reading this blog after The World Cup 2018- you’ll remember this as the year of true belief that it was in fact, coming home. At the time of writing this, we’re in the thick midst of World Cup fever. The words ‘The World Cup’ ‘World Cup’ and the official #WorldCup2018 have been used 13,785,012 times across Facebook and Twitter in the UK since the tournament started on June 14th. So it’s probably pretty fair to suppose that there is substantial interest in the topic for brand’s end users.

Luckily for this frozen food giant, they share a name with one of this year’s qualifying teams. Not everyone has that stroke of luck; however- we can all draw our own relatable elements from this year’s tournament. During the last World Cup Instagram had an estimated 150 million monthly active users. As of December 2017, Instagram reported 800 million active monthly users. An increase of 433%. So, with 433% more people to actively comment on, consume and engage with content- themes like the World Cup present excellent opportunities for brands to show themselves as real people to their customer base. Iceland has proven that in reality not every social post has to be entirely conversion led, brand awareness and exercising your personality through a content theme can be much more beneficial.

Musclefood would naturally have some amount of brand affiliation to a sporting tournament. However, their content surrounding The World Cup decided to focus more on the social implications and increased levels of social occasions as a result of high-pressure games. Statistics and previously unearthed insights into trending topics are often easily accessible ways for brands to assimilate their content within a theme. 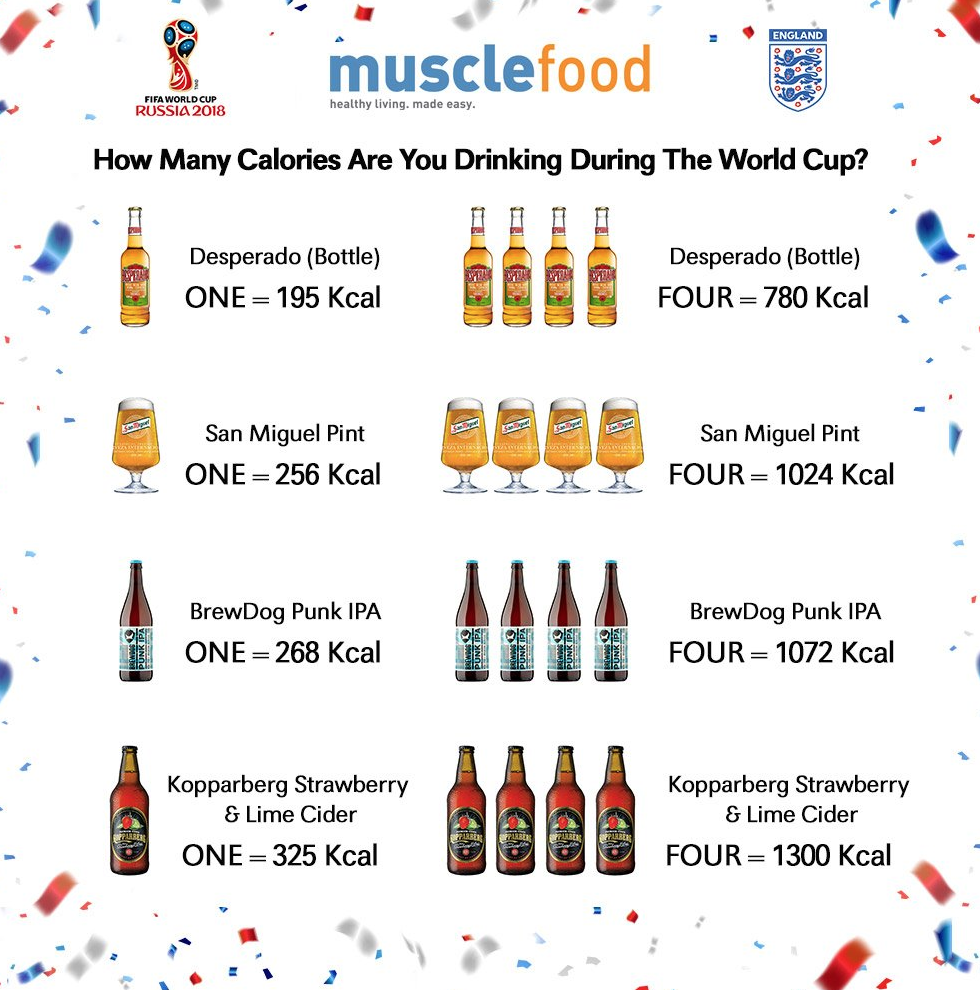 How not to do it

This blog comes with a warning. Not only should you be selective about the themes you choose to affiliate yourselves with, but you should also ultimately always stick to the one golden rule of social engagement – think before you tweet. Many brands have carved out a particular brand style that allows them to be openly vocal about many topics, sharing views they know their audiences also share. However, social is a big space, and it’s likely there are going to be a few people that don’t take kindly to your brand bashing of the latest love island contestant. Your campaign can be conceptualised from the very best of intentions, but it is always important to check every possible perspective. Split test within your office, send out some proofed content and triple check that copy. Here’s a lesson in how not to nail content marketing and a successful CSR campaign all in one go from Mastercard.

Their social CSR campaign promised 10,000 children would receive 1 meal every time international giants Lionel Messi and Neymar Jr. scored in the World Cup. Seems full proof right? Two of the world’s most prolific goal scorers’ both tipped for the golden boot and a shoe-in for the final. Not quite, as social media users were quick to point out. Not only did this rely on both player’s longevity in the tournament, it alluded quite naturally to the fact that MasterCard could provide such a charitable donation yet decided to put lifesaving resources in the hands of fate. MasterCard quickly apologised for the lapse in judgement and was forced to rethink the campaign. Messi and his Argentinian teammates were subsequently knocked out of the tournament in the group stages, making the legs of the campaign even more shakey and open to criticism.

In conclusion, you may feel that a trivial dating show has absolutely nothing to teach us about modern-day marketing. However, it’s abundantly clear that there is a massive wealth of brand opportunity in pretty much any theme. You need to make sure you pick the right bandwagon to jump on.

An Introduction to Google Lighthouse How Colour Influences Our Decision: Colour Psychology in Design
Back to Blog