Yorkshire Tea: A Brand’s Proper Use of Social Media

I was recently asked – what company do you think uses social media for brands effectively? Luckily, I wasn’t put on the spot there and then and had time to consider my answer. You see, it became apparent answering this wasn’t as simple as it first seemed. A go to answer would be those big brands with countless followers. But this is a common misconception; that likes (or followers in this case) equals success. 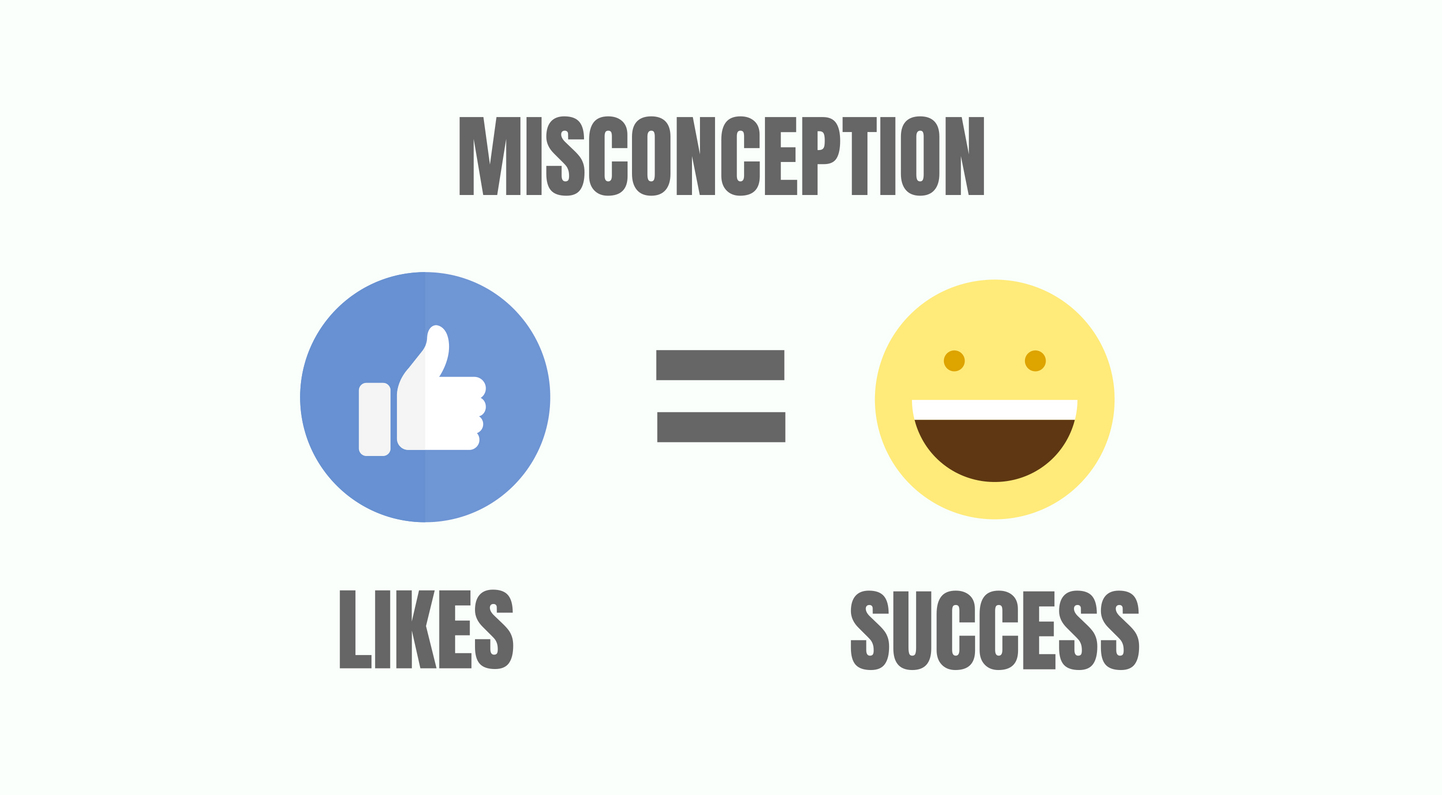 Just because you have managed to bag yourself tons of fans, doesn’t mean they are genuine. Are they engaging with your content? So actually, real business success on social media is much more than this. To elaborate I introduce Dom Dwight, Brand and Communications manager for Yorkshire Tea.

This leads me on quite nicely to the brand I chose to answer the leading question in this article; Yorkshire Tea. Pre-2010 Yorkshire Tea had got a reputation for itself. An old ladies drink, out of touch with modern society and younger people in general. The brand was well known, successful and shifting a hefty number of products per year. But its competitors – Tetley , Twinings and Ty-phoo for example were looking to move their brand forward and Yorkshire Tea needed to do this too. What they needed was a plan, one to shake the attitude towards and the connotations associated with their brand. Also, to acknowledge a progression in marketing, to a more digital age – where they didn’t want to get left behind.

In short, they were majorly successful in reinventing themselves. Their marketing strategy had a big focus on social media. Their approach was wise, having caution when it came to social media numbers such as the number of followers a company has. Their aim was gain genuine likes for their brand. How did they achieve this? One way, was to pay attention to the particular TYPE of content they were sharing.

Social media for brands often use content which is led by wider culture and events assure they look up to date and living in the very same moment that their audience is. In the examples below, Yorkshire Tea uses sporting events such as Wimbledon or The World Cup as the perfect opportunity to share some humorous content. Their content is looking to entertain (see Biscuit Domino Rally below) inform or educate, not to spam their channels and their fans with constant salesy product pitches. Essentially, they’re looking at how they can provide value to their audience through the content they create and share. This approach looks to build a community of fans rather than just followers.

Yorkshire Tea are also very good at integrated multichannel campaigns. That is, creating content that takes advantage of different channels and platforms and is aware of the users viewing content on differing devices.

TV campaign ‘Little Urn’ was a response to their audience (listening to your followers or industry is a very good idea – more on this later). Fans overseas were becoming increasingly frustrated with the lack of a ‘proper brew’, this is where Little Urn stepped in taking quality cups of tea to the people. The original TV campaign was broken up into episodes, or chapters released over time. Their social media provided another level to this content, ramping up the activity on the build-up to air. Cleverly they ran a social competition alongside this campaign, to win a holiday in the destination featured. They also invested more into paid advertising for the duration of the campaign.

Later ‘The Tea Song’ followed suit with a 3-minute TV advert which was also hosted on YouTube. Their social media acted as an exclusive behind the scenes camera – sharing videos and photos from the making of the advert. The piece itself is pretty intriguing alongside the catchy tune, makes the audience want to discover more and be a part of the Yorkshire Tea world.

It’s important to mention when dealing with cross-platform content you need to have a strong set of brand guidelines and consistent tone of voice across all channels, platforms and devices. This reinforces the overall brand personality and feeling of familiarity.

Often, brands have to look to the wider company culture for inspiration and content assets. Having brand partners, supporting causes or linking with charities can provide great content for social media channels. Yorkshire Tea is involved in many aspects of the Cricket world including England Cricket, Cricket in Rwanda and Grassroots initiatives. They also have their own environmental project ‘Yorkshire Tree’ in association with The Woodland Trust. As well as something closer to them as an industry – Improving lives in Assam, where the tea is grown.

Not only is the act of helping others seen as morally right, empathy and sympathy are human characteristics which are then reflected on the brand as a whole. Yorkshire Tea are incredibly successful and by recognising they are in a position of power they take the responsibility to make a real difference. From a business perspective however, this opens doors for mentions, links and wider exposure for the brand.

Perhaps a more obvious one, the influence of getting a celebrity involved with your brand can be priceless. You are basically paying for access to their audience, a shot at having influence over their buying habits. And there’s that word; influence. Influencers can be celebrities in their own right, but they grew out of the trend to use such individuals. You could argue celebrity-first influencers are those with more trust.

Yorkshire Tea adopted this approach with backing from various celebrities including the Brownlee brothers, Kaiser Chiefs, Michael Parkinson and several England cricket team members. One thing to note is how they stay relevant and authentic to the Yorkshire Tea brand, using well known Yorkshire personalities. Their campaign ‘Where Everything’s Done Proper’ subverts typical advertising, with celebrities being involved with the campaign rather than just a vehicle for the product. They happily play, narrate or perform in the advertisement genuinely enjoying themselves and the culture created by Yorkshire Tea.

The use of celebrity backing for business opens a door and widens your audience.

Why is Yorkshire Tea succeeding at Social Media for Brands?

Using varied content types set Yorkshire Tea up nicely for those floods of genuine followers to start committing to the brand. But all this wouldn’t be possible if it weren’t for the marketing team and their thinking. Success for them is down to a team with the right attitude to social media, understanding of the platforms they use and appreciation of the value of a genuine, engaged audience. Their approach I think is led by two major pillars which I outline below.

Overall the aim of social media for a brands or business is to create a sense of desire. Your audience must look, digest and be left with a feeling (unconscious or obvious) of desire to own, use or experience your product. This however isn’t easily measurable. There are no hard figures to reflect emotions or feelings generated. There is one metric which can be used to indicate loosely if this is happening and that’s sentiment. Measuring sentiment, or how many times your brand is mentioned online, that is you’re being talked about is a good way to gauge whether or not the desire for your brand is increasing.

Marketing activity for Yorkshire Tea saw their sentiment rating grow immensely in the first couple of years. From 500 times a month in 2010, to 15,000 times a month just two years later. Dom Dwight illustrates their reaction to this saying

“You can’t deny that the amount of people talking about you is a good thing. Especially when you have a sentiment analysis that shows it was 98% positive”.

Worth noting here that not all press is good! You can have a high sentiment rating, but if its negative it will no doubt have the same effect on brand reputation and sales. 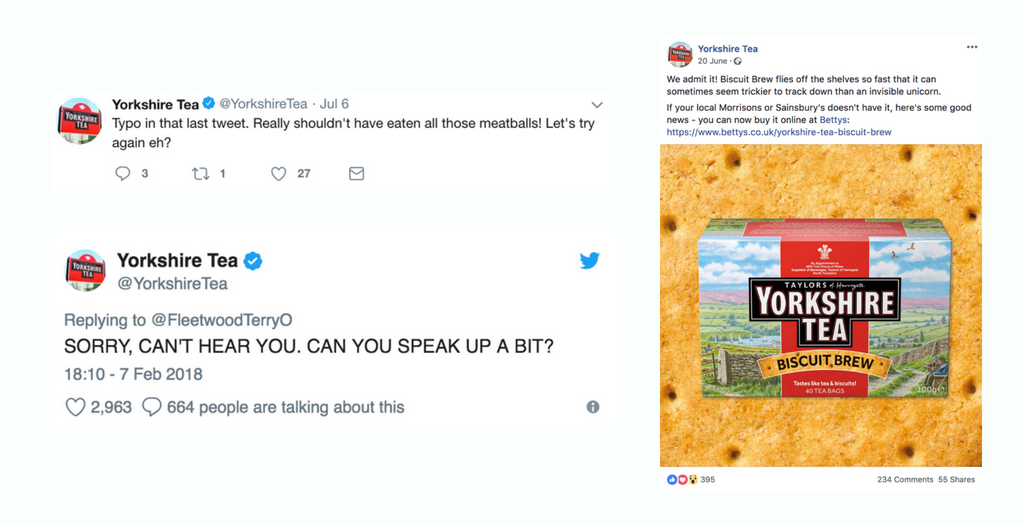 From looking at Yorkshire Tea’s social media activity you quickly get a sense of personality through their interaction with fans. Their customer service is top notch, addressing people as a human rather than a robot. They of course will have their own approval systems and processes to use when dealing with enquiries or complaints, but it’s about making it seem there is not. Answers are natural and conversational, no scripted jargon in sight.

Injecting that all-important Yorkshire character is really important for them, present in the examples below. One see’s them acknowledging their typo error and the other a reaction to a Twitter trolls all capital rant. They’re also not afraid to admit where they have perhaps not been up to the mark or delivered. The Facebook post below acknowledges that they didn’t predict such a great reaction to their new Biscuit Brew and thus stockists were running out. Instead of not talking about it, they instead tackle the subject head-on and offer a resolution for their customers – where they can purchase the product online.

What makes a company successful on social media?

Yorkshire Tea are a social media for brands and business role model. They’re consistent, open and honest with their audience and deliver the best form of content, across various platforms with the right attitude. To quote a colleague of mine, Mark Newton (he has also explored social media algorithms in this awesome blog)

“It’s really simple. The companies that are doing social media for brands successfully are those that are allowing some amount of real humanity. People don’t want to be spammed with product ads. They want engaging, entertaining, informative, shareable, fun stuff. They have for years. They will do forever! (probably).”

What value should you attach to a Digital Agency? Introduction to Laravel Nova
Back to Blog