An introduction to Basecamp

Who or what is Basecamp you may ask? Founded in 1999, Basecamp is a privately held American web application company. Formally known as 37signals, Basecamp, a web-based project management tool was the first product to be launched in 2004. After several successful products, in 2014 37signals decided to officially change their name to Basecamp to completely focus on this product.

Basecamp is used by designers, writers, developers and project managers all over the world and this year in 2019, it marks their 20th year in business. After reaching this impressive milestone, Basecamp has decided to rebrand!

Now if you are familiar with Basecamp you may or may not already know that they already somewhat rebranded back in 2015 for the launch of version 3 of Basecamp. They did this by putting a smile on the Basecamp logo. I know right, it was that simple! Now, Jason Fried, one of the founders of Basecamp claims he didn’t wake up one morning and say “ let’s put a face on the Basecamp logo”. In reality, a string of events led up to this initial rebrand.

According to signalvnoise.com; In 2014 at the C2E2, Chicago (Chicago Comic & Entertainment Expo) a company called Shawnimals, who create everything from art and prints to stuffed toys, attended the event and decided to collaborate with Basecamp by creating a limited edition stuffed toy of the Basecamp logo. Nicknaming the toy “Happy Sherpa”,  this was to highlight how creative customers use Basecamp to overcome seemingly impossible tasks. 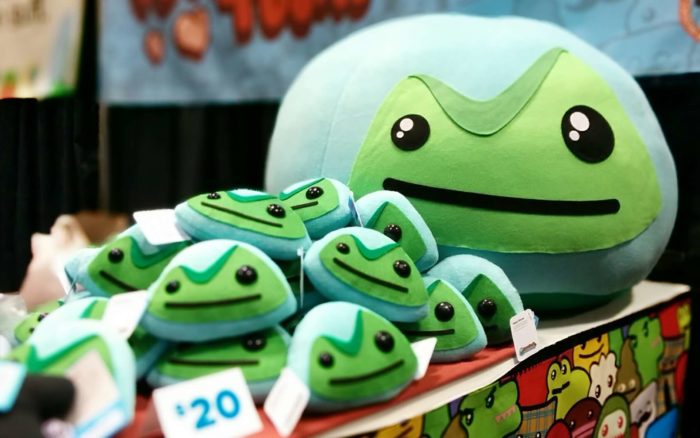 Additionally, another creative called Nate Otto was creating some illustrations for a new marketing site by drawing scenarios of the Basecamp logo to showcase the concept of “something being made with Basecamp”. After several concepts, one idea was chosen and this was of the Basecamp character running a conveyor belt machine. 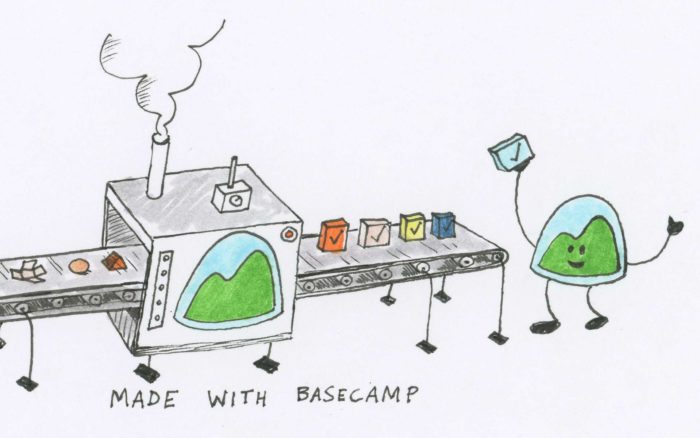 Naming the character “Basecampy”, Jason Fried wasn’t too set on that name. After a few ideas and suggestions on a name change, Basecampy was later renamed to “Happy Camper”. It fits perfectly don’t you think? Nonetheless, this is how Happy camper got his place in Basecamp 3.

Now enough about that, let’s talk about the Basecamp 2019 rebrand, shall we?

Here it is, the 2019 rebrand. What do you think? Now, we can’t officially say why they decided to rebrand or what their thoughts behind the rebrand are but from our initial reflection, the simplicity, and the less is more approach makes this logo very current and on-trend. By stripping it right back the bold continuous line it pays homage to the previous logo. Accompanied by a bold sans serif typeface, both the device and the font compliment each other perfectly.

Additionally, on their website, they have added a hover state onto the logo as seen in the example above. Having this splash of colour fill the icon brings the logo to life and adds character.

Here at Fifteen, we use Basecamp every day to help with managing our projects and we love this rebrand. From speeding up processes to giving us a unified space to compare notes, communicate and plot strategy, Basecamp is the perfect tool to manage several unique projects all at the same time.

This secret weapon is part of our arsenal and has helped us imagine incredible design, development and digital marketing solutions. From brand workshops to full content strategies, PPC, social media management and countless other services we are pleased to have such a robust system back up our award-winning work.

What are your thoughts?